Last week I got a surprise.  There in the flower bed just outside my back door were two little clumps of Michaelmas daisies, announcing the arrival of Autumn.

Can you see them on either side of the reeds? 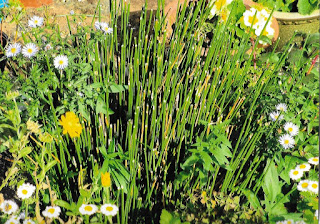 They are pale blue with pointed petals. I can't remember having planted them, but I do now recall that they have popped up in previous Septembers at this, their appointed time.  Because of lockdown I was unable this year to pay my usual Spring visit to a garden centre for a selection of bright annual flowers to decorate this border.  Instead, I let Nature take its course!  When several large green weeds appeared I just left them alone - and was rewarded with bursts of daisy-like flowers.  This cheerful unexpected display has made me more aware of the wonder of wild flowers. 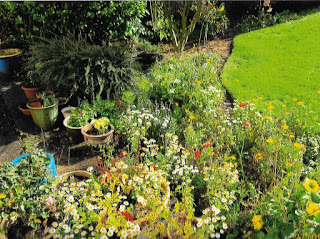 In August I remembered the delicate little blue harebells I had discovered in the nearby large open green space (formerly a golf course) the day after I came to live in Prestwick.  Were they still there this August? I wondered.   I took my camera and set off to look.  Yes!  Twenty-five years later, there they were, in several tufts of long grass. 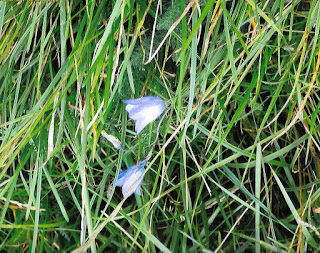 Where did all the wild flowers come from originally?  How easy it is just to say carelessly, "Oh, the wind must have blown the seed here".  But where did the seed itself come from originally?  There are so many thousands of flowers, of different colours, shapes and sizes, each set to bloom at a certain time of the year.  How quick we are to accept them casually as a "given", without pausing in wonder to ask ourselves where they came from - and who was the "giver"!  I love these words from Iris Murdoch:

People from a planet without any flowers would think we must be mad with joy the whole time to have such things about us.

Throughout the summer my quiet sunny back garden proved to be a safe place to chat with people (one at a time!)  - such as my friend Muriel. 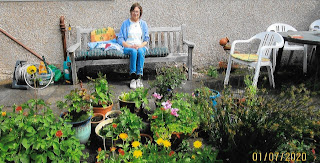 At the beginning of September she told me that her church in Ayr was going to re-open for a Sunday morning service.  The number of worshippers would be greatly reduced, but a recording of the service would be available online.  I was delighted to find it on my Kindle, especially because this is the church where I attended Sunday School and sang in the Junior Choir, where Bob and I were married and where Sally, our first child, was baptised.  How lovely to see the beautiful stained-glass windows again, and to hear the magnificent organ.  In the late 1990s, after I retired, I came back here for organ lessons as part of a training scheme to enable pianists to play the hymns if the organist was indisposed.

Matthew, the present organist, and his wife Rachel, a professional singer, were leading the music at the online service.  Unfortunately, because of the danger of spreading the virus, congregations are not allowed to sing the hymns out loud.  However, as the words were being shown on a screen, Rachel sang each hymn in her lovely strong voice.  Towards the end of the service she sang an extra hymn as a solo, i.e. the words were not displayed.   I was immediately reminded of a strange Coincidence which had occurred on the very first day I saw Rachel and heard her sing.

It was at an organ recital in Ayr Town Hall.  For ten years there have been weekly Monday recitals there, from noon until 1pm.  Organists come from all over the UK and even from Europe to play the Splendid Lewis organ.  When it is Matthew's turn the recital is always very well attended.

On that particular occasion, the Town Hall clock had already struck noon when I parked my car in the carpark on the opposite side of the River Ayr.  As I hurried towards the bridge, I looked at the river and saw that a big tree trunk had been brought downstream during the recent heavy rain.  On top of it was perched a large bird.  "Oh, there's a gannet", I thought - but then immediately corrected myself.  "No, it's a cormorant, not a gannet."  At that very moment a helicopter flew directly overhead, and simultaneously I heard a man say to his little son, who was sitting on his shoulders, " Oh, look!  That's a helicopter from HMS Gannet!"

As I crossed the bridge, I was amused to think of the coincidental gannet (bird)  and Gannet (helicopter) as I was on my way to an organ recital!  "It would just be like the thing if if the programme includes something with the letters GAN" I thought.  But I couldn't recall any piece by Bach or any other organ composer which had GAN in the title.

Matthew had already begun his splendid performance when I arrived so, as quietly as possible, I slipped into the back row downstairs.  Michael, the concert organiser, passed me his copy of the programme.  I was surprised to see an unusual addition: a solo singer.  I read that Matthew's wife Rachel, who is from Wales, was going to sing several items, beginning with a lullaby, Suan GAN, the words of which are set to a traditional Welsh melody Yr Hun GAN!  I couldn't believe my eyes, and had to suppress a loud chortle!

So that is why, as I watched the online church service, I felt the goose bumps rise again when Rachel began to sing her solo hymn, Holy Spirit, gift bestower - which is set to the tune of Yr Hun GAN!

What is the significance of such coincidences?  I don't know exactly where they come from, but I do know that for over fifty years they have become an integral part of my Christian faith.  Every day as I say the Lord's Prayer, I pause on the words 'Thy will be done', and at the end I often add (from Psalm 119:v 33) 'Just tell me what to do and I will do it, Lord.'  Many other people tell of feeling an insistent nudge to obey a new instruction.  Their stories vary according to each person's individual nature. (Just as flowers vary greatly!)  For me, coincidences often confirm a recent Leitmotiv - a recurrent theme which leads me to a new path in life's journey.  This September, the theme has been the importance of hymn singing. So I'll finish with the first verse of the hymn Rachel sang: